The history is written all around us—carved into the craggy curves of Portuguese Bend, drawn into the wet sand of Cabrillo Beach—but other than a few geographic reminders, there isn’t much left with which to trace the port’s Portuguese past. Although this is probably a result of a bottomed-out population, it’s also at least partly tied to the unpronounceable turns of the Portuguese tongue—words that sever their connection to Spanish with unfamiliar Xs and Õs. But as the sole local representative of all things Portuguese, Artesia’s Portugal Imports doesn’t need any translation: Its appeal is indisputable.

Aside from the colonial overtones of Brazilian barbecue and the links of linguiça that accompany Hawaiian breakfasts, it’s almost impossible to find an honest source of Portuguese cuisine. And because Portugal Imports is fully aware of this, the market, like Harbor City’s La Española, operates as close to a one-stop shop as possible—armed with enough spending power, you can stock almost every corner of your pantry.

Artesia might not seem a logical epicenter for Portuguese food (there are barely enough blocks to contain Little India), but Portugal Imports has turned it into one. Still, the shop is fairly small—the only thing at all imposing about the market is the neighboring dairy plant that spits out so much steam it probably influences weather patterns.

Sweet tooth or not, what should drive any visit to Portugal Imports is its fresh-baked breads and pastries. There’s coffee to accompany whatever you order (and also two tables for café-style consumption), but the market is all about take-home convenience. And by far the best baked good to bring home is massa sovada, the famous Portuguese sweet bread. Here, batches of it—domed loaves as big as pumpkins—sit waiting near the register to inspire impulse buys. But massa sovada should always be on your list—a slightly sweet bread so perfect in its airy simplicity that it makes you wonder why you waste any time with America’s sugar-shocked confections.

Dessert-minded shoppers should also stock up on the equally excellent queijadas. The dense little tartlets are available in over a half-dozen flavors, including a toasted toffee-like caramel, a sliver-studded almond and a macaroon-besting coconut. There’s also massa folhada (a phyllo-dough construction stuffed with cream) and rosquillhas secas (crisp doughnut-like rings coated in a barely-there glaze).

Though it isn’t as diverse as the bakery, Portugal Imports also has a worthy savory side. Shelves are stocked with the basics: oils, spices and lots of canned goods, like tuna packed in olive oil. There’s nothing especially Portuguese about the tuna (it’s available in all sorts of European markets), but it’s still a nice buy—a quick and easy step toward a salad Niçoise. The freezer is home to the most interesting items, though, like packs of pastéis de bacalhau (cod quenelles typically fried up and served as an appetizer) and what seems like a dozen variations of linguiça.

Portugal Imports also does drinks. Besides the requisite wines, you can opt for cases of Sagres (a Lisbon-brewed beer) or bottles of a long-lasting passionfruit concentrate so potent it has to be diluted with eight cups of water. Proving the shop really does monopolize the Portuguese market, there are also racks of rustic earthenware, and T-shirts, and totes, all emblazoned with the national crest.

Even with complete command of the area’s Portuguese cooking, the shop certainly doesn’t navigate the entire spectrum of the country’s cuisine. But between the freezer full of sausages and a counter loaded with sweets, Portugal Imports can at least steer you toward some Iberian essential.

We are first generation born in the United States. Our family is from the island of Terceira in the Azores Island group. Many of our family members left Portugal for the opportunities of the United States and brought over the language and traditions which are still celebrated today. 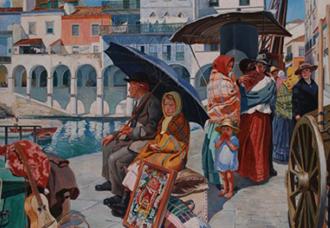 Serving the food you remember to share with friends and family.

As with other cultures, Portuguese cuisine is very important to our identity and many of our traditions revolve around it.  Portugal Imports is Southern California's source for Portuguese food products.